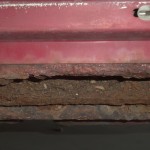 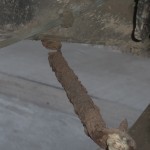 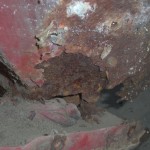 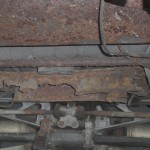 It was so bad, I almost swore I would never complain of being bored with Mickey D’s ever again. Almost.

After several days of traveling, we had BOTH had enough of McDonald’s, Burger King, and the like. We settled into our hotel in Georgia, ordered some Chinese takeout from a recommended restaurant, and made plans for the next day. The goal was to get home as fast as possible.

The food. It was underwhelming, at best. I swear, some takeout places purposely skimp on traveling customers in order to save money, and the even “better” ones pretend like nobody speaks English when you offer some constructive criticism. We both got a shrimp dish with approximately 10 broccoli pieces to each shrimp. Shrimp that weren’t deveined, even.

What’s worse than finding you have a sensitivity to shrimp? Finding it out when over 1,000 miles from home*. Our plans? Hah. The only thing happening quick and snappy were bathroom trips. We only got about 20 miles down the road before we found another hotel to crash in. Forget our usual preference for continental breakfast – the LAST thing either of us wanted to think about was food.

Moral of the story: Some kinds of food are best enjoyed close to home. Chinese, Mexican, and Cracker Barrel are the three I can think of off the top of my head. Oh, that’s right, I don’t enjoy Cracker Barrel any more, but I’ll leave that story to the imagination. It’s pretty crappy.

*It’s not an issue with peeled and deveined shrimp, just the, ahem, “intact” ones. We eat shrimp quite often at home.

Necessity, the mother of invention

About three years ago, we went to pick up a Doug Nash 4+3 Corvette transmission from Tennessee. It was actually cheaper for us to pick it up than it would have been to ship to Ohio. (They are quite a bit heavier than a normal transmission.) We thought we’d add some value to our trip by seeing what we could find in the area. Ohio cars, especially older sports cars, can be a bear to deal with because of rust.

So, on that lovely Sunday morning, we consulted the oracle in Craigslist to see what all we could find. What we found in Sunbright, Tennessee, was a first generation Mazda RX-7 in beautiful shape (minus a few bad apex seals) for $400. We called and made arrangements to look at the car, and possibly pick it up.

What we ALSO found is that no Uhaul location even remotely close to Sunbright was open on Sundays. The closest open location was in Georgia. Off to a hardware store commonly known as “Horrible Fright” to purchase a 5,000-lb capacity tow bar. We had seen quite a few people use these without any problem, so we figured it would be more than enough for this RX-7.

We traveled up winding mountain roads up to Sunbright, where we met up with a very nice family looking to sell their RX-7. It was a project they hadn’t gotten around to and were more into bikes and such, so the RX-7 was ours. It almost wasn’t.

What we do when towing is travel for a block or two, check and adjust everything, go for a few more miles, re-check our load, and then go on our merry way. It can take a few stops to get everything to seat in properly, but after a few adjustments it’s usually smooth sailing. The worst I usually have to worry about is a misbehaving ratchet strap. HOWEVER….before we could even find a place to do our first check, we heard an ominous “SCREEEEECH” and a pop while rounding a corner.. Our Horrible Fright tow bar had split at one of the mounts. To make matters worse, we were on a pretty steep slope and the car was dangling. We were not in a very populated area and the closest hardware store was the Horrible Fright we stopped at 20 miles before.

Lucky for us, the man who sold us the RX-7 had a tow dolly that belonged to his brother in law, and he was nice enough to let us borrow it. He met up with us at the gas station we’d pulled into with along with the RX-7 hanging from one side of our errant tow bar. True to our word, we brought the tow dolly back to Sunbright a week or so after that. Other people’s trust and generosity? Awesome. Horrible Fright tow bar fail? Not so awesome. Don’t worry, we’ve already learned to call UHaul *first* before anything else.